Romantic Love Is Just a Fantasy at First 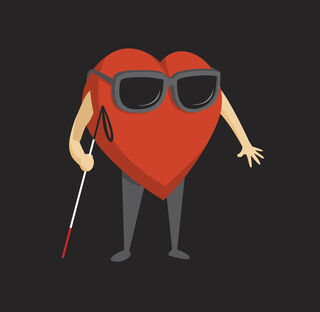 Romantic love is among the most written about and photographed topics ever and yet, it is still elusive. Ephemeral and magical, romantic love can be as hard to hang onto as a wisp of smoke or a cool summer breeze, while at other times, it is as strong and durable as steel or granite. Romantic love can sneak up on us, catching us by surprise, or develop slowly like advancing age. Its sudden onslaught can be overwhelming or its low, steady pace difficult to discern. Full of contradictions, love is impossible to pin down with any degree of certainty, and yet, most everyone would agree that romantic love is a valued emotional state, worth devoting considerable time and energy to its pursuit and maintenance.

While romantic love can be defined as a blend of sexual desire and emotional attraction, its ingredients are not always clear. In addition, it is not readily apparent why romantic love endures some of the time and not others. When a young man was asked on Valentine’s Day what love is, he answered, “I think it’s really just a feeling. When you’re in love, you just kind of know. It’s pretty indescribable.” What he didn’t know was that feelings are not permanent fixtures; they come and go, changing over time. The high divorce and separation rates for marriage and live-in partners attest to the reality that romantic feelings, even strong ones, do not guarantee relationship success. After the honeymoon phase, romantic attraction gets undermined by the humdrum routine of ordinary life and relationship satisfaction declines.

Because romantic love is evoked to perpetuate the species, it has strong biological and unconscious underpinnings that create our fantasies. Operating just below the level of rational thought but manifest in night dreams, fantasy functions as an aphrodisiac and colors our perceptions. Painting with idyllic strokes via idealization, fantasy transforms the dark-haired muscular truck driver into Hercules or the curvaceous, petite blonde (or brunette) into a beauty queen. We project our ideal self onto total strangers. Whitewashing flaws and magnifying positive qualities, our imaginations create the ideals that our hearts desire.

While there are many individual variations, the most important components of love fantasies tend to be values, similarities, unfinished business, positive past experiences, and pressing needs. Both values (e.g., intelligence, physical attractiveness, integrity, money) and similarities (family background, educational level, socioeconomic status, and/or religious affiliation) are typically covered by dating sites trying to match applicants with ideal love choices.

Unfortunately, the factors ignored by matchmakers are often the most salient features of love fantasies. For example, the search for a partner who is unconditionally loving (like an ideal parent) is often a primary component of unfinished business. For men and women who had a difficult relationship with a parent or caretaker, either because of abuse or emotional unavailability, the quest for a more compassionate and nurturing partner is often part and parcel of their love fantasy. Adult children of divorced families often search for stable partners who are the opposite of their absent or philandering parent.article continues after advertisement

Likewise, for individuals who believe they lack certain valued qualities, the search for partners who have the missing ingredient (the need for completion) can be the dominant aspect of their fantasies. A shy woman often falls in love with an outgoing man, a life-of-the-party type, in hope that some of his liveliness will rub off on her. Similarly, the immature young man who lacks discipline is often attracted to a super-competent woman who he hopes will transform him. In both cases, they will be disappointed, and the quality they admired will become a source of irritation. She will come to resent his comedic antics, and he will come to detest her ostensible superiority.

Positive past experiences refer to those people and characteristics that were consistently a source of pleasure. A grandmother’s smile or a favorite uncle’s teasing banter will often be incorporated into the fantasy of an ideal love partner. As for pressing needs, loneliness, anxiety, self-esteem loss following rejection (an important feature of rebound love), and biological clock issues can influence romantic attraction.

For example, when the biological clock is running out, a potential partner who would have been rejected earlier as ‘too boring’ may begin to look attractive. The desire to have children can color one’s perception of an interested party and the boring suitor may then be seen as reliable and loving rather than dull. When viewed through this new lens, his reserve and lack of spontaneity become less significant. Psychological vulnerability doesn’t necessarily distort reality, but it changes the configuration so that positive qualities stand out while negative traits recede in importance.

The Mastery Motive in Romantic Love

The mastery motive—the desire to gain mastery over difficult and/or anxiety-laden experiences—is dramatically evident in the toddler’s repeated attempts to walk despite regular falls or the budding musician’s endless rehearsals of the same song until near-perfection is reached. In romantic love, mastery motivation is evident when a parental figure was both admired and disliked; he or she may have been professionally competent, famous, and/or financially successful, only to drink too much and display marked cruelty at home.

When there is strong ambivalence, adults often seek out partners who appear similar to such a parent’s positive features. Unaware initially of their partner’s negative traits, they are disappointed when disturbing behavior emerges and are prone to rationalize it, ever hopeful that everything will work out. The woman who finds one alcoholic lover after another and the man who keeps choosing unfaithful women as life partners are trying to rewrite their personal love stories and supply them with happy endings. Unfortunately, while hope springs eternal, the mastery motive is not a particularly effective mechanism for providing what is needed, because it blindly seeks a reenactment of the past without regard for this new person’s reality.article continues after advertisement

What then will sustain a romantic relationship built on fantasy? After the smoke clears and the fantasy dissipates, the most important bonding factors become commitment (religious or otherwise), communication (especially being able to resolve conflicts in a peaceful manner), and companionship (enjoying one another’s company). These big C’s along with friendship (based on affection, respect, and trust) and emotional responsiveness (sensitivity to one another’s feelings) are the ingredients that solidify a romantic relationship. Equitable distribution of labor in a shared household and a mutually satisfying sex life are also important in keeping a romantic partnership healthy, no matter how unrealistically it started.

In contrast to the old adage that opposites attract (which is often true at first), similarity, especially around attitudes and values, is the more permanent glue. While being blinded initially is par for the course, it is important to discover within a year or so whether a romance has enough staying power to last. In old India, the prevailing philosophy regarding romantic love was, “First you marry, then you fall in love.” While their implied advice about marrying blindly sounds foolish, Indian sages were trying to convey that lasting love occurs primarily when you know someone well.

This post is adapted from an essay, “Romantic Love Is Mostly an Illusion,” published in BEYOND PIPE DREAMS AND PLATITUDES: Insights on Love, Luck, and Narcissism from a Longtime Psychologist, Outskirts Press, 2021.